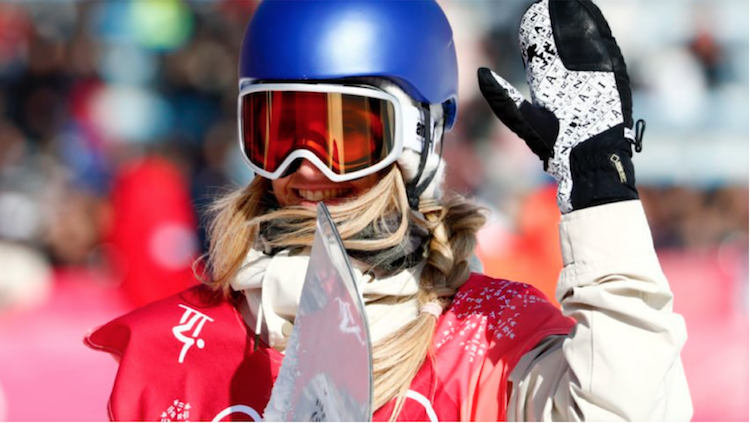 Gymnastics aren’t just for aspiring gymnasts. The many benefits of gymnastics have proven to reap rewards in many other sports and physical activities thanks to its mental and physical benefits.

Gymnastics helps develop both mental and physical skills. Not only do your kids learn important mindfulness tools such as patience, resilience, and conflict resolution, but it causes an increase in their physical prowess.

In fact, gymnastics helps in 3 departments crucial to thrive in any sport: coordination, flexibility and reflexes.

Combine all these fantastic traits, and you’ve got one confident kid. And a confident kid is willing to chase any dream…even if that dream is to become an Olympian!

Gymnastics is the cornerstone of many winter Olympian’s training, from figure skating to snowboarding.

Below are 5 examples of Olympic Athletes from all over the world who got their start training in gymnastics.

Gasser got her start as an aspiring professional gymnast. She made her way to the Austrian national team before deciding to challenge herself a bit more by trying something new. Enter: professional snowboarding.

Now, Gasser is the winner of the ESPN award for best female action sports athlete and gold medal recipient of the 2018 Olympics Ladies’ Big Air event.

Peltonen is a professional figure skater who hails from an entire family of Olympic athletes. Her father was a silver medal winner for ice hockey in the 2006 Olympics, and her grandfather participated in Olympic ice hockey in 1968, 1972, 1976 and 1980.

She was chosen to represent Finland for the 2018 Olympics, and recently won an FBMA trophy.

Peltonen got her start early in life learning gymnastics and ballet, a great combination for coordination, balance, and flexibility that undoubtedly contributed to her success at figure skating once she decided to take to the ice.

Like many Olympians, Sasha Cohen began her career as an athlete early. She began gymnastics in her early adolescence, switching to figure skating at age 7.

Her second attempt at the Olympics proved to beeves better when she received the silver medal for women’s figure skating,

Caldwell is an aerial skier, aka “gymnastics on skis”. So it’s no surprise that her first sport was gymnastics.

Caldwell began gymnastics as a young child. Her mother was inspired to enroll her into the sport as early as age 2, after she attempted to land flips off the kitchen stairs.

By the age of 13, Caldwell was recruited by the US ski team on a campaign that targeted gymnasts and divers for their athletic abilities.

At age 14, Caldwell left home to train in aerial skiing full time. By 2010, she became the youngest American in the Olympics Vancouver Games.

The 2018 Olympics Chinese snowboard team blew everyone away with their success, and they credit a lot of it to their recruitment strategy.

All the team members were recruited from sports schools where they were training to be gymnasts or martial artists.

The skills they learned in these sports transferred to snowboarding better than expected. The athletes went from never setting foot on a halfpipe to becoming world-cup level competitors in just 2 months.

Whether your kid dreams about becoming a world-class athlete or they just want to have fun, gymnastics has proven to be the perfect solution!

Starting your kids in gymnastics early gives them the strength and confidence to shoot for any star, athletics or otherwise.

It’s never too early to start Olympic training the fun way! Take a peek at our toddler gymnastics program for 2-3 year old’s>